This universal design project provides clear evidence that sometimes it’s the little things in life that make the biggest difference: going in and out any time you want, checking the mail, or just getting around the house easily, especially the kitchen and bath. These are all things that Karen B., a stroke survivor with use of only her left side, couldn’t do without great effort in her former home, a two-story house in Denver.

Karen’s main way in and out of the house was via a pair of narrow, shaky aluminum ramps set over the stairs to the front door [1]. At one point, I half-jokingly asked Karen if she’d ever fallen off them and was surprised when she said, “Yes, three times.” Each time she had to call 911 and wait until the fire department came to pick her and her power chair up off the ground. 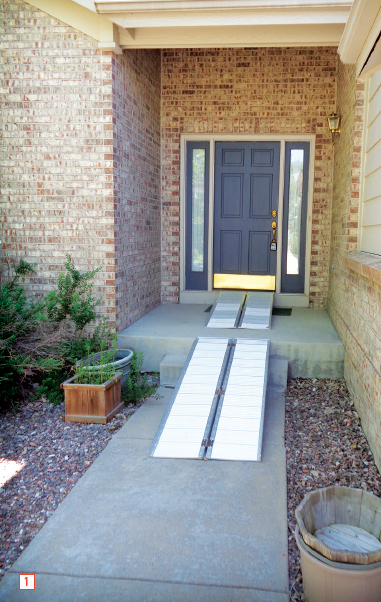 It was time for Karen to find a smaller, one-story home that would work better at meeting her needs, and with help from her real estate agent, that’s what she did. Given Karen’s particular requirements, her new address in the Denver suburb of Thornton needed a considerable amount of remodeling to get it ready for move-in. We got involved through a referral from a past accessibility remodel client.

Coggeshall Construction, an award-winning Denver remodeling company started by David Coggeshall 40 years ago, worked seven days a week to complete the project in three weeks. To save money and time, many existing fixtures and components were reused, and most new materials came from a nearby Home Depot.

Five key functions had to be addressed in this design: access in and out, accessibility inside the home, making use of the bathroom and closet, using the kitchen, and access and function of the outdoor space in back.

Getting In and Out

It was a ranch house, yes, but it was about 2 feet above grade all around. For someone in a rolling chair, 24 inches may as well be 24 feet. We also wanted to provide more than one safe way in and out of the house, and we could see three possibilities: the front door, the garage, or via the back patio. We deferred the pricey front ramp and entry porch and pursued the other two options.

Karen doesn’t have a car, so we appropriated one bay of the garage for a gentle 4-foot-wide switchback ramp built out of 2-bys and plywood, plus an easy set of steps to the side of the 5-by-5-foot landing for ambulatory visitors. I was worried about the turning radius of her power-chair at the landing, so I visited Karen at her old house and taped it out on the floor of her kitchen to make sure that she could do the turn [2]. It worked! 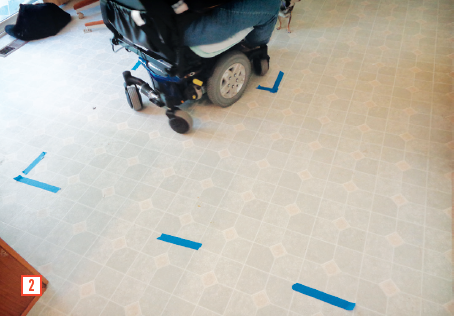 We wanted to paint the plywood to keep it cleaner and I recalled Karen telling me her favorite color is purple. The bright lilac porch paint surprised Karen and put a big smile on her face when she saw it for the first time on move-in day [3]. “Now I can just roll down this ramp to take out the trash or recycling or check my mail,” she said, somewhat incredulously.

Second exit. The other way out of the house is through the kitchen at the back. One selling point for the home was a concrete patio, two-thirds of it roofed. However, it was 8 inches down from the door of the kitchen eating area and steeply sloped toward the yard. The solution was to leave the concrete in place and build a deck on top of it [4]. Coggeshall ran sleepers from the house out to the edge of the patio, making sure that the Trex decking was absolutely flush with the door [5].

He also replaced the narrow, difficult-to-operate sliding vinyl door with a wide, swinging door with a very low accessible threshold that makes it much easier for Karen to get in and out. A new ramp at one end of the deck leads down to an existing sidewalk that runs completely around the house to the front driveway [6].

The new accessible deck has become Karen’s favorite feature in the house, and she spends much time out there every day watching the dogs in the yard. Since the deck was larger than she needed, we decided to reserve the far corner of the deck for a 42-inch-square raised planter so Karen could garden from her chair [7]. She can see it from the inside as well. Right now it has mums and ornamental grasses, but she’s looking to add a catnip plant for her two cats.

The compact bath and closet area consisted of a series of small spaces that needed to be opened up. How small? The water closet compartment was 30 inches by 48 inches with an in-swinging door. A second narrow door provided access to the walk-in closet, which was next to a conventional shower with raised threshold and sliding doors.

The solution was to remove the walls and doors to open up the area around the toilet and walk-in closet [8]. The toilet stayed in exactly the same location but was rotated 90 degrees so Karen can roll up to it and steady herself with a grab bar to her left. She also needed a 20-inch-high seat, but detested the clunky plastic hospital-looking ones in her old house. We found a 3-inch riser, called the Toilevator, which slips in under the ADA-height toilet and gives Karen the extra height she needs without anyone being the wiser [9]. (It’s ironic that we call this kind of remodeling “universal design” when the most successful projects are quite customized to specific homeowner needs.)

The old shower was replaced with a curbless pan sloped to a trench drain across the back. Waterproofing extends out onto the main floor as well. The shower is about 4 inches wider than the original and uses a shower curtain instead of doors. Several grab bars and a handheld shower allow use either sitting or standing [10].

The vanity was replaced with a wider unit with a roll-under sink and a single-lever faucet. The top of the vanity mirror tilts forward slightly to make it easier for Karen to see herself when sitting at the sink. Twin LED sconces provide ample lighting with a super-long lamp life. Changing bulbs is a bit of a challenge for Karen, so fixtures throughout the home were re-lamped with LEDs.

Most of the interior doors were 30 inches wide, with a usable passage width of 28 inches. That was too narrow for Karen’s 29-inch-wide chair, so we replaced them with 32-inch-wide doors—the maximum width we could accommodate—with the available option of offset hinges if they proved too tight. At the garage entry, we swapped out the 32-inch-wide door for a 36-inch-wide one to give extra maneuvering room. We also changed the garage light switch to a motion sensor, so whether Karen is going out or coming in, she instantly has light and doesn’t need to fumble around for a switch.

We removed the carpeting throughout the home, as well as the vinyl in the laundry and bathrooms. In its place we installed oak hardwood for easy rolling. We used inexpensive porcelain tile in bathrooms for the same reason.

The kitchen had great cabinets and counter space, but was isolated from the living room and jammed into an inaccessible corner, with a peninsula narrowing the access [11]. The solution: “explode” the plan by moving the fridge and surrounding cabinets to an opposite wall in what had been the dining area [12]. At the same time, we opened up the wall that used to hold the fridge so Karen can now see her guests or her pets in the great room [13]. And we removed the full-size dining table to give her easier access to the back door.

Almost all of the old cabinets were reused, and the lead carpenter, Victor G., built a matching utility/pantry cabinet on site and installed it next to the fridge. He also reused a pair of old doors to provide access underneath the roll-under sink. Although the panel that concealed the plumbing was carefully scribed around the garbage disposal, I asked if he could build a box to cover it. I was delighted next time I was on site to see that he’d carefully wrapped it in oak veneer! [14] 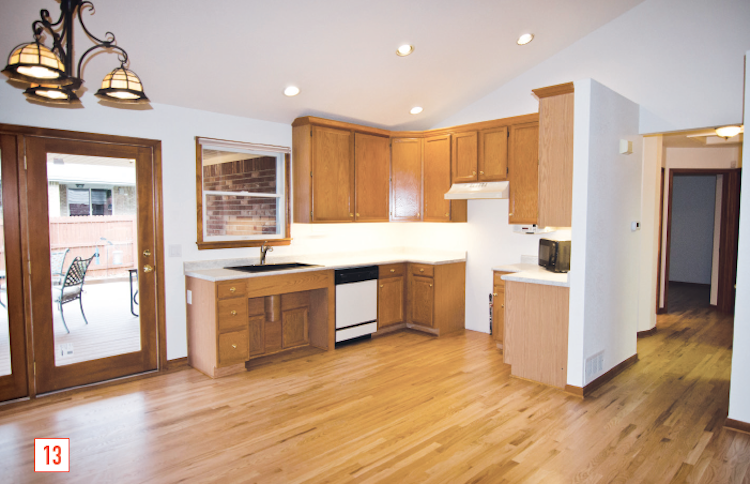 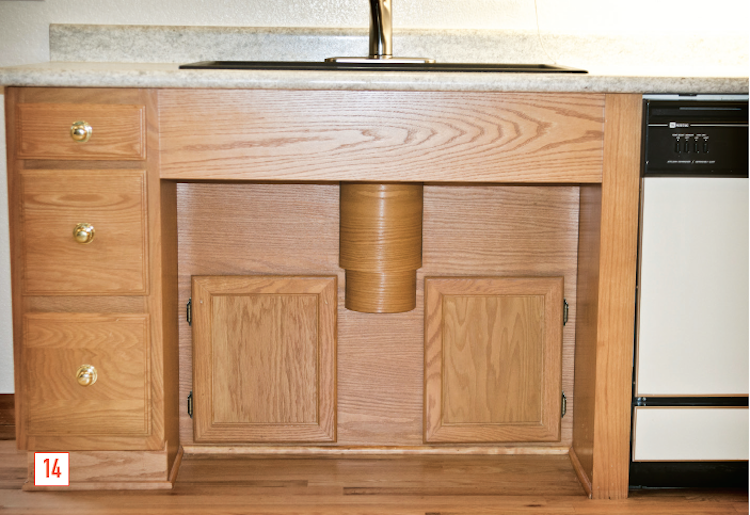 What Makes It All Worthwhile

Soon after she moved in, I called Karen to see how it was going, and she told me she loves everything we did. She explained how much better the quality of life is in this home, both for her and her pets. (At the old house, the yards couldn’t be fenced so the dogs could only be put out on a leash, which wasn’t easy for Karen to do.) I happened to ask if she had named her home, and without missing a beat she said, “Yes: Independence Hall!”

The smile on Karen’s face was enough reward for Denver remodeler David Coggeshall and me, but we were both totally taken by surprise when, out of all the gold-prize winners from every category of HBA of Metro Denver’s 2016 CARE Awards (Colorado Awards for Remodeling Excellence), this little universal design project won Project of the Year. Usually this kind of recognition goes to a mega-whole-house remodel or quarter–million-dollar gold-plated kitchen.

Jenni Russell, a designer at Hōm Solutions and chair of the Remodelers Council of Metro Denver, as well as a contest judge, put it in perspective when she said: “This is a project that shows why people go into the building industry in the first place. We get into building not only to make beautiful homes but to make life better for the people who live in them.’’