K&B by the Numbers: Remodelers Weigh in on Current Trends

Visit a home show or look online at trendsetters’ blogs and you will get the idea that every homeowner wants a floating vanity, sleek LED-lit countertops, and walk-in showers. But the facts on the ground say otherwise. Yes, some early adopters are ahead of the curve, but for the most part remodelers find that clients want traditional remodels and conventional products. New ideas and profiles percolate slowly over the years.

In a recent Professional Remodeler kitchen and bath trends survey, most respondents (45.1%) said that clients want traditional styles in their kitchen; about one-quarter said clients wanted transitional (28%) or modern (21.6%) style. This makes sense when you consider that most homes in the United States are traditional, but acknowledges that people also want to “modernize” their kitchen designs. According to George Edwards, COO of A&C Kitchens & Baths, in Chester Township, Pa., and the national awards chairman for the National Association of the Remodeling Industry (NARI), consumers are doing that in ways he calls “eclectic”—mixing a rustic farmhouse look with contemporary cabinets, for example, or adding in a “hutch passed down in the family.” 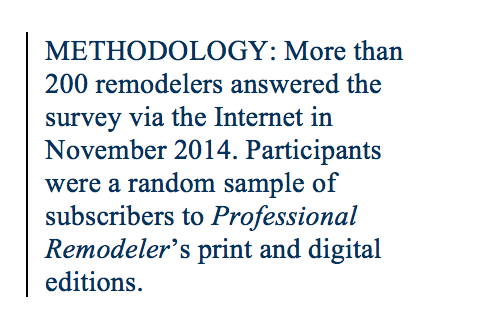 Maria Stapperfenne, president of the National Kitchen and Bath Association (NKBA) and certified kitchen and bath designer with Tewksbury Kitchens & Baths, in Whitehouse, Station, N.J., says that clients are opting for a “transitional style” to bridge the gap between traditional and modern. “Transitional style soothes their aesthetic, with clean, simple lines yet still allows them to maintain the historical architecture of their house,” she says.

In both the kitchen and the bathroom, granite is still the number one choice for counter or vanity tops, followed by quartz and solid surfacing. And the vanity style most asked for is something that resembles furniture: A large number of respondents said they’re installing vanities with legs, both with toe kicks (46%) and without (45%). “A classic vanity [with no legs] that sits on the floor gives the perception that the bathroom hasn’t been updated,” Stapperfenne says. A vanity with legs and a toe-kick is up-to-date, but practical because “things don’t roll under it.” As for the vanity with legs and no toe-kick, while it makes a room seem more spacious, “It’s all about cleaning,” Stapperfenne says. People want the ability to sweep easily underneath.

While most respondents said that this year’s kitchen and bath projects were not larger in scope than in previous years, it seems, as one respondent commented, that clients are asking for a “higher level of detail” in a variety of products and finishes in both rooms. Andres Mittal, senior project designer for Hammer Contractors, in Gaithersburg, Md., says his clients are requesting quartz, Silestone, and Caeserstone for counters and vanities, and some want “onyx, which looks fantastic but is hard to keep and maintain. It’s unusual but it’s being asked for more.”

Nearly all (92%) respondents said clients ask for more storage in the bathroom either “sometimes” or “always.” One respondent commented that finding the extra space “usually involves moving a wall, incorporating part or all of an adjacent room, or pushing out an exterior wall.”

What kinds of storage do client’s want? According to Stapperfenne, they’re looking for linen closets, deeper drawers, a medicine “pantry,” and open shelving.

Bob Peterson, president of Associates in Building & Design, in Fort Collins, Colo., says he’s putting in shallow pencil drawers at the bottom of vanities and any storage he can create other than medicine cabinets. “I haven’t sold a medicine cabinet for years,” he says. “If there’s place to put a cabinet or built-in, clients are fine with that, but they don’t want it behind the mirror.

Broader trends in sustainability and universal design (for all ages and stages, as opposed to aging-in-place) affect kitchen and bath trends, too. While 75% of respondents reported that clients are “sometimes” asking for sustainable products, they’re not, as one respondent put it, seeing product sustainability as “a prerequisite for the kitchen remodel.” Clients are, however, asking for LED lighting and energy efficient windows.

“LEDs are driving the lighting system market,” says Ed Webb president and co-founder of Koncerted, a Waltham, Mass.-based “digital concierge” company that works with building professionals and homeowners on commercial and residential electronics installations. Webb says government regulations as well as price changes that make LEDs more affordable are affecting consumers’ buying habits. Plus, they’re not as hot as incandescents, making them versatile. “You can do funky things with LEDs,” he says—backlighting vanities, putting them inside a dressing mirror, or above cabinets to up light a ceiling, or under cabinets a few inches above the floor to light the way to a bathroom. “They look so different at night ... you can change the whole look of a room.”

More clients are asking for universal design elements in the bathroom than in the kitchen. About one-quarter (24%) of respondents are installing comfort height toilets, and 21% are installing grab bars or hand holds. About 17% are installing zero-threshold showers—an element that could be the big crossover from the UD realm.

Originally seen as a luxury item, with better innovations in shower pan and drainage technology, installation is easier and costs have come down. “At KBIS last year, I finally saw some manufacturers [showing] angled shower pans that go underneath your tiles to help get the slope for the drain,” says Paula Kennedy, a certified kitchen and bath designer with Timeless Kitchen Design, in Seattle and an NKBA-University instructor. “The new products are making it easier to install and more cost effective.” Mittal says this is true in his DC-metro area market. “A lot of people are requesting the barrier-free shower, which used to be reserved for those with disabilities,” he says. “But people are moving toward having more of a wet room and shower with no threshold. It’s now becoming standard for us.” PR

Stacey Freed writes on remodeling topics from her home in Rochester, New York.

For the most part, remodelers find that clients want traditional remodels and conventional products The History of the Remodeling Industry

How has the remodeling industry become the way it is? Industry expert Mark Richardson dives in and shares.

The 20 Hottest Markets for Remodeling in 2022

Is your market one of them?