When tiny, white, foam beads first appeared between the ceiling planks in my office, I told myself it wasn’t a problem. The office—a small structure in my backyard—was built with EPS foam insulation, and investigating the beads would mean cutting the ceiling, or tear off the roof. Better to avert my eyes and get back to work.

But over time, the beads began to claim more territory, showing up farther down the length of the boards and falling like bird droppings onto various surfaces. What’s worse is that spending time in the office was starting to make me feel sick. I had headaches, respiratory problems and a persistent bad taste in my mouth, like biting on a dime. Much of my workspace was covered in a fine coating of polystyrene dust.

The first step was figuring out the source of the problem. My neighbor, Craig Stiff, is an excellent carpenter who works with local construction companies here in Dallas. We drilled a hole in the soffit and Stiff stuck his fingers inside to feel around what should have been solid foam.

Instead, what poured into his hand were beads, dust and (not surprisingly) a large contingent of ants. Clearly, the ants were the culprits and had damaged the foam with their tunnels and nests. Multiple visits from an exterminator did nothing, and over time, going into the office started to make me feel so sick that I could no longer work in there.

Most of the general public, and even many remodeling professionals, don’t understand the effect that environmental toxicity can have on people’s lives. In this case, the foam was not the problem. Although off-gassing occurs during the manufacturing process, EPS foam is inert when it leaves the factory. Burning the stuff in an unventilated area is never a good idea, but overall, rigid foam is not considered to be chemically harmful to humans. 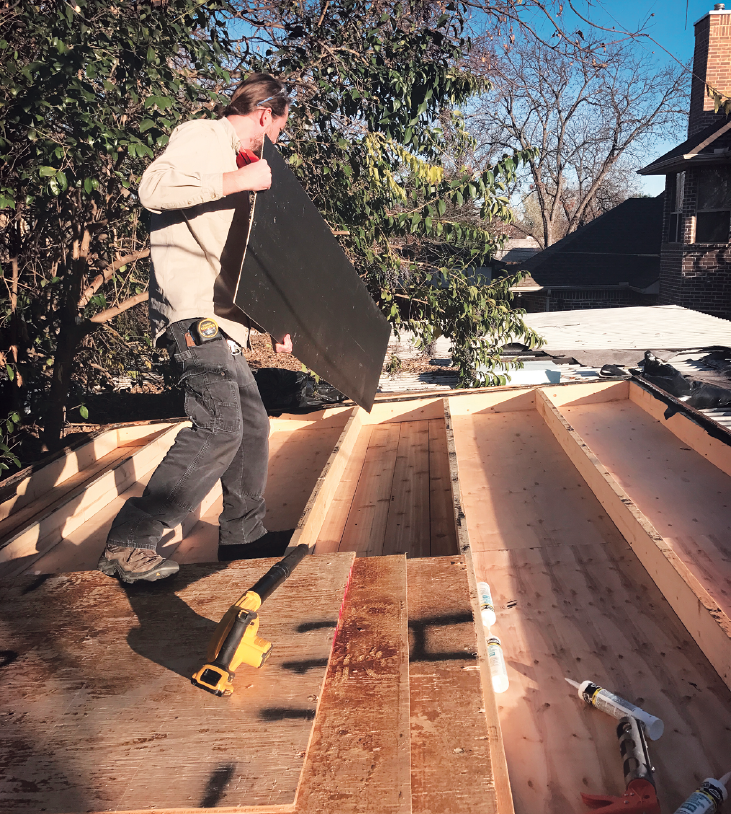 Before placing the new plywood over th eceiling planks, Stiff painted one side of each piece black so it couldn't be seen from inside the structure.

So what was going on? The answer was probably a combination of things, says Michael Anschel, president of Otogawa-Anschel Design + Build in Minneapolis and an authority on building science. “There’s the ants eating and creating ant poop,” he explains. “And the shredding of the foam causes particulate, which has a respiratory component. Everybody’s sensitivity is different.”

In the end, the only solution was to remove the roof and put in a different type of insulation that would prevent the problem from ever occurring again.

The intel on ants is that they like damp spaces; however, after taking apart the roof, we could see no evidence that water had ever been in contact with the rafters or plywood. I’ve since learned that it’s common for carpenter ants to create a satellite colony, which can be located in drier areas. Ants especially love foam insulation because it’s a perfect  material for them to use in creating tunnels. 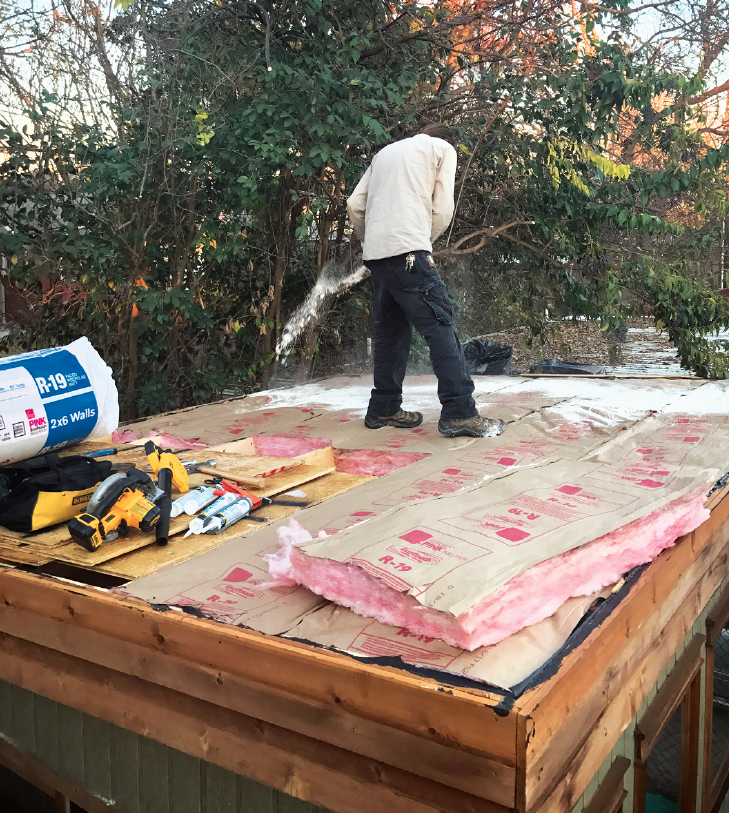 After removing the old roofing and sheathing, Stiff and I fitted ¼-inch plywood strips into the rafter bays to cover the ceiling planks, and batt insulation on top of that. As an added precaution, we sprinkled a layer of diatomaceous earth (DE) across the new insulation (pictured right). DE is a powder made out of the fossilized remains of tiny aquatic organisms. It kills insects by compromising the waxy coating on the outside of their bodies, which causes them to dehydrate. (No doubt this step was overkill, but tearing apart a completely functional roof will put you in an overkill frame of mind.)

We then added new plywood sheathing, a layer of felt, and finished it off with roll roofing. Stiff applied some extra adhesive as well. “There’s waterproof roofing adhesive applied about 6 inches in from the drip edge on all four sides,” he says. “I also put the caulk over the nail heads for additional protection from water.”

The result is a simple, yet effective roof that will keep my office dry and bug-free for years to come. This Pro's Pick is a new insulation that is easy to use and keeps its rigidity while remaining soft to the touch. The New American Remodel team relied on lessons from a decade of technology improvements to create a winner in the race to zero. Here’s how they did it.