The Big Stretch: How to Make That Kitchen Remodel Budget Go Further

Cheap. It’s a word that Danny Feig-Sandoval prefers not to use. In fact, the owner of Atlanta-based Small Carpenters at Large would rather see it struck from the remodeling vernacular. After all, it can have grave implications for professionals whose reputations are on the line.

“‘Cheap’ means you’ll have to do the work over again pretty soon because it’s low quality,” he says. “We can always do it a little more ‘inexpensively’ but it’s never going to be ‘cheap.’”

One might think this sentiment is universal, but there’s still a misconception among homeowners, and even some professionals, that to achieve an affordable kitchen, style must be sacrificed for price. But experts such as Feig-Sandoval are dispelling this myth. By educating their clients, arming themselves with information, and approaching materials from a fresh perspective, remodelers are proving that it’s possible to achieve a high-end look without breaking the bank.

Here, Feig-Sandoval and others share some surefire cost-cutting approaches to help you deliver big on your next budget-conscious kitchen.

The More You Know

Home remodeling has gotten its mojo back, with steady growth seen from $281 billion in 2011 to an estimated $315 billion last year, according to the Joint Center for Housing Studies of Harvard University. And thanks to homes gaining equity, it seems that clients who are ready to invest in their homes are crawling out of the woodwork. This is true, especially with the Baby Boomers, who are emerging as a leading force behind the recent surge of remodeling work.

But not everyone is dropping huge dollars on a kitchen upgrade. From remodeling TV shows that promise design on a dime, to consumers comparing prices online, perceptions of a realistic budget are changing. However, as Feig-Sandoval points out, this isn’t always a bad thing. “The important thing is getting homeowners to understand how involved a kitchen project is,” he explains. “It really helps if they understand why it could cost so much.” 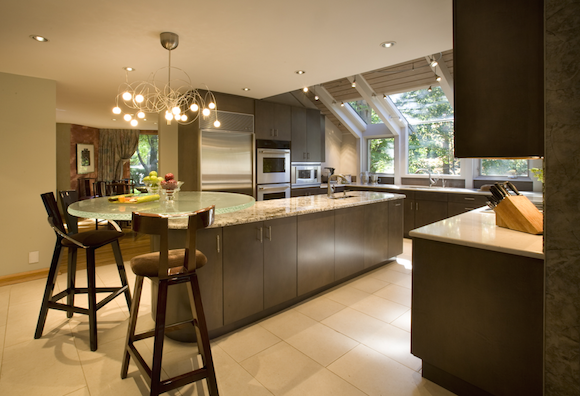 For this kitchen remodel, Judy Mozen gave a fresh face to existing appliances. Instead of replacing a practically new refrigerator, the president of Atlanta-based Handcrafted Homes swapped out the glass door with a custom stainless steel panel for a cost-effective way to get her clients the look they desired. (Before photo, above, right.)

Keeping up on the latest manufacturer deals also helps with price control for the client. For example, in recent years, many appliance manufacturers offered package deals with big rebates, and while the really hearty promotions are slowly disappearing as the economy improves, you still can find good options says Joseph A. Giorgi Jr., owner of Giorgi Kitchens & Designs, in Wilmington, Del.

Appliances are just the tip of the promotions iceberg. Some quartz countertop manufacturers will upgrade a color free of charge, while cabinetry makers have been known to offer a premium finish or upgrade to an all-wood interior for no additional fee.

“Some [remodelers] are great at designing but they’re not familiar with the ins and outs of specific manufacturers, or they don’t have a showroom and are at the mercy of going to home centers,” Giorgi says. “We are fortunate that we have a good working relationship with suppliers who keep us abreast of promotions. [Promotions] are still available, though not as readily as in 2012. You just have to look for them,” he adds.

There’s a lot more to budget-friendly design than just education. These days, professionals are recycling or refurbishing everything from cabinetry and lighting to flooring and appliances, partly to go green, but also because it can lower project costs.

Recently, Judy Mozen did just that for a kitchen makeover that was part of a whole-house remodel. The clients already were spending a large sum on the property and needed to save on the kitchen. So the president of Atlanta-based Handcrafted Homes breathed new life into the existing cabinetry, shaving $15,000 off the project’s cost.

Instead of replacing all the custom cabinetry, Mozen, who also is the president-elect of the National Association of the Remodeling Industry, redesigned the space, moved the old cabinet pieces around, refinished them, and created a completely new configuration. 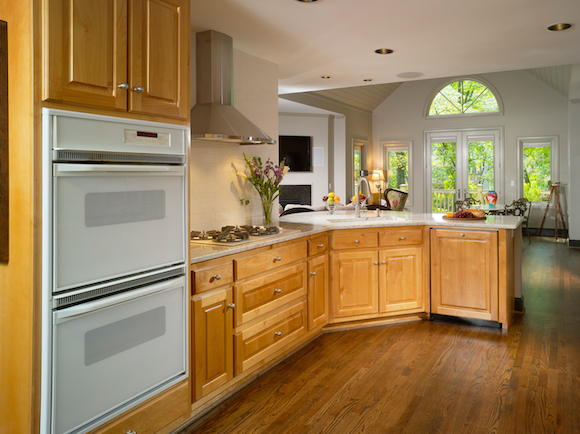 A mixture of new and repurposed cabinetry, cut from the same knife, made this kitchen and adjacent wine bar (below, left) possible for Atlanta remodeler Judy Mozen’s clients. (Before photo, below, right.) 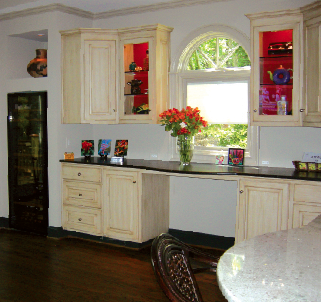 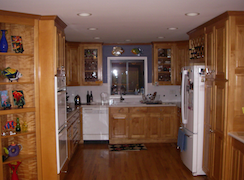 “I saved money by using architectural design and got every piece [of cabinetry] used,” she says. “I was able to get the doors and cabinets made to look like new, and it ended up working out really beautifully. It would have cost $20,000, but I only spent $5,000.”

For another project, Mozen proved that even existing appliances can be reinvented. Her clients had purchased a high-end oven and refrigerator with black glass fronts just two years prior to the remodel but wanted stainless steel. Mozen worked with the manufacturer to order new oven doors and also had a piece of stainless steel cut to replace the black glass in the trim kit of the refrigerator. Thinking outside the box saved her clients about 50 percent of the cost, she says.

Giorgi has gotten in on the refurbishing game too. Sometimes he will take on a project that’s a complete redesign and will incorporate existing elements such as cabinetry. Other times, the savings come from focusing on smaller elements, he says. When it comes to lighting, for instance, Giorgi will reuse existing recessed cans and put in new trim and bulbs rather than replace them with a new fixture. Or he’ll salvage and refinish the home’s interior doors because they are solid wood. The key is to have as many options as possible. “If you can reuse something, obviously you not only are saving on cost of material but also on labor, so you try to hit on more than one way to save,” he says. “The more ideas you come up with, the better. Ideas don’t cost you anything.”

Another tactic for reducing expenses for a budget-minded client is to suggest a simple aesthetic with straighter lines, limited or no moulding, and less overall detail. 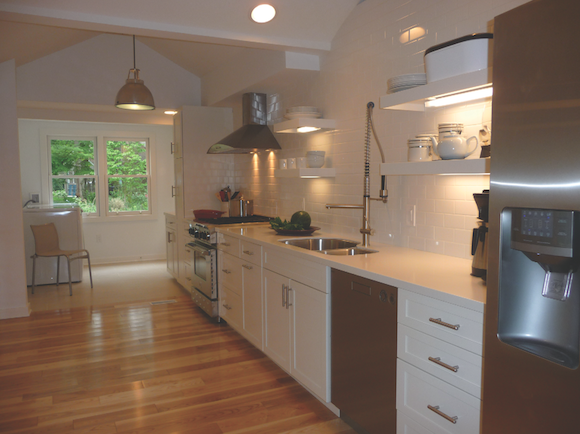 Designer Oliva Minakowski of Giorgi Kitchens & Designs demonstrates that less is more with this European-style kitchen. By using floating shelves in place of traditional cabinetry, not only is the kitchen functional and more spacious feeling, but the price tag is much lower.

For a recent project, Giorgi’s team met his clients’ budget and expectations by creating a light, open feel, and eliminating wall cabinets altogether. Instead, they suggested floating fabricated solid-surface shelves with added accent lighting. A tall pantry and a short run of base cabinetry opposite the eating bar provide storage. All told, the price tag was reduced by $4,000.

In another home, the cost savings added up to more than $15,000 thanks to incorporating existing features, as well as a helping hand from Giorgi’s client. Upon the remodeler’s suggestion, the homeowner completed 90 percent of the demolition and tear-out himself, a task that lead to the discovery of a brick wall that was then incorporated into the design for a rustic feel. The customer even wire brushed and sealed the brick. Meanwhile, instead of replacing the flooring, Giorgi had the hardwood patched and the finish blended to match the original 100-year-old texture.

Often customers can be overwhelmed by the number of options on the market. But having choices is what can drastically reduce costs. Take tile, for example. If a homeowner steps into a design showroom, the most expensive product usually is on display right at the entrance, and a client will immediately fall in love with it. But with proper guidance, a designer can achieve the client’s desired look for a fraction of the price.

“It’s about being wise in your selections and not getting hooked in the ‘I have to have that’ thought process, trying to keep up with the Joneses, or going for the Holy Grail,” says Philip Calinda Jr., owner of Millennium Custom Homes, in Livingston, N.J. “It is possible to get beautiful tile for $2 a square foot versus $15.”

Taking it a step further, Feig-Sandoval says that you can suggest fusing high-end and budget-friendly materials. For instance, if the expensive tile is a must-have for the client’s backsplash, try designing a backsplash that features a few of the high-end tiles as accents mixed in with a less costly option. Doing so will create impact yet will save several hundred dollars.

The same can be said for countertops. With more granite fabricators than ever before, the price for the popular material once thought to be reserved for those with higher budgets now is becoming increasingly competitive—and is closing in on solid-surface options. One-of-a-kind colors still will exceed the price for those on a tight budget, warns Giorgi, but if the client is willing to make an exception and select a more popular granite color, the money saved can be diverted to another higher ticket area in the kitchen.

Quality and price also are changing for flooring. Luxury vinyl tile (LVT) has come a long way, for instance, Mozen says. “LVT is not the same as it used to be,” she points out. “There are some very nice ones. You just have to look.” But, Mozen warns, for every category of tile, you can find a luxury vinyl that is more expensive than the real deal.

But ultimately, “there’s no one magic wand to wave to cut costs,” Giorgi says. Every project is different, and it’s all about being creative in both design and selection to meet each customer’s needs. PR

Hunter Madison is a seasoned construction journalist who has written for numerous trade and consumer publications. He lives in Southern California with his wife and two children.