Is Franchising for You?

Here’s something you probably didn’t know: Every eight minutes of every business day, someone in the U.S. opens a franchise location. Franchises are so pervasive and blend so seamlessly into the business landscape that we hardly notice them. You might do business with nearly a half-dozen franchises in a day—eating lunch (Burger King), buying screws (Ace Hardware), getting your car repaired (Maaco), renting a replacement car (Hertz), shipping a package (The UPS Store).

Here’s something you probably did know, or you at least suspected: Franchise companies tend to be more sustainable than other types of businesses. An Arthur Andersen & Co. study of 366 franchises found that 97 percent were still in business after five years, a figure confirmed in a U.S. Department of Commerce report, which found that fewer than 5 percent of franchises are terminated each year. Compare that with the U.S. Small Business Administration study, which found that 62.2 percent of new businesses fail within their first six years.

Franchises are popular with aspiring business owners for good reason: they tend to be successful, sustainable, and, ultimately saleable. But franchising, like many businesses, took a hit during the Great Recession. Franchise unit numbers fell after 2008, as franchise businesses failed or franchisees that wanted to expand found that they couldn’t get credit. “Most of the prospective franchisees were damaged greatly,” says Doug Dwyer, president and CSO at franchisor DreamMaker Bath & Kitchen, in Waco, Texas. The recession left “some pretty big scars,” he says, and even today, prospective franchisees remain skittish.

Even so, franchising began to rebound in 2012, with lodging, health care, and casual dining leading the way. Home renovation franchises are coming back, too. According to research center IBISworld.com, a fully recovered housing market and annual sales of at least 5 million existing homes will drive franchise growth in the fields of handyman, plumbing, electrical, and home inspection. “Franchises in the home improvement sector,” the center’s report states, “are well-positioned to capitalize on the recovering economy and obtain a strong foothold for future growth over the next five years.” IBISworld.com projects, for example, that handyman franchise revenue will reach $3.1 billion in 2018.

That number seems conservative to Brad Fluke, CEO of The Honey Do Service, the newest of more than a half-dozen franchises offering home repair. Like many franchisors, Fluke’s idea was to take his own highly systematized Virginia-based operation and multiply it out exponentially (there are 26 franchises so far). In home renovation, this has worked far better in narrowly focused niche offerings than in full-service remodeling, an industry that consultant Mark Richardson calls “unfrachisable.”

Franchises are typically able to charge substantially more than local independents because franchise brands come with the assumption of professionalism, stability, and reliability.

“We do everything,” explains Lisa Walling, co-owner with her husband, Jeff, of bath franchise ReBath of Tucson. The ReBath model uses only employee installers, which enables the Wallings’ company to run “a very tight schedule” on a type of project that, when it lags, seriously inconveniences homeowners.

In franchising, the brand is a business model, and whether or not it’s successful usually has more to do with how much energy and attention franchisees will put into it than the feasibility of the model itself. To turn your business into a franchise requires systems that can be taught and replicated anywhere. 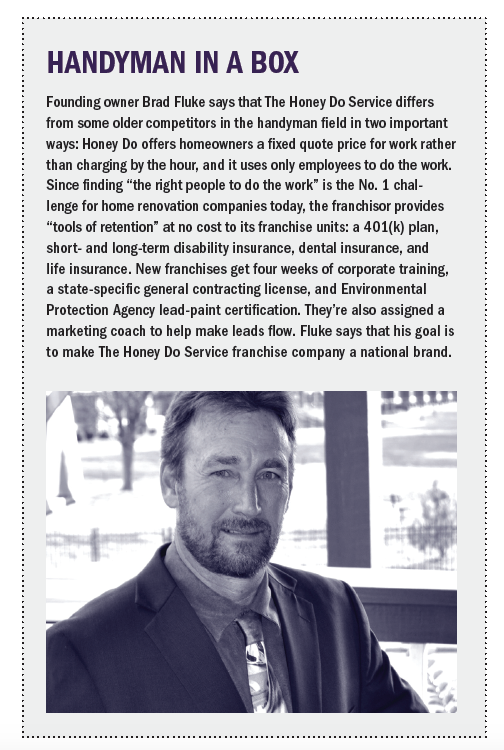 Take gutters, for example. For years, people had asked Ryan Parsons and his brother, Ken, whether their business, The Brothers That Just Do Gutters, in Poughkeepsie, N.Y., was a franchise. It wasn’t. But, inspired by Michael Gerber’s book The E-Myth, as well as the hugely successful franchise 1-800-Got-Junk, the Parsons set out to turn every part of their gutter business into a documented process that would be portable and repeatable. (Read more about the Parsons in "Mailbox Money," below.) Last year they launched The Brothers That Just Do Gutters franchise.

Gutter businesses, Ryan Parsons says, are a lot like independent junk haulers: It’s one guy, a helper, and a truck. “I don’t know many who do more than $300,000 in sales,” he adds. What the brothers figured out was that a well-managed gutter operation could generate millions in sales—their Poughkeepsie gutter business multiplied sixfold, from $500,000 initially to $3 million last year—with a healthy gross margin. Replacing gutters wasn’t new, but their method of running a gutter company was.

“We just have a really good way to do this,” Ryan says. Before launching, he and his brother took themselves out of the management of their own gutter company to focus on a franchise business that is “all about support.” Recognizing that their initial franchisees would likely be installers looking to become businessmen, they set up a centralized call center to process inbound leads and set appointments at all the Brothers franchises.

Why Buy a Franchise?

Franchisors will be the first to tell you that franchising is not for everyone. But for installers who are unfamiliar with marketing or sales, businesspeople without contracting experience, or remodelers looking for a brand to build on, the right franchise often clicks.

Curt Trampe, owner of DreamMaker Bath & Kitchen of Springfield, Ill., had a solid remodeling business when he bought the kitchen & bath franchise eight years ago.

“Things were going well,” he recalls, but he saw DreamMaker as a way to exclusively focus on kitchens and baths—the two projects he prefers. Last year his franchise business did $1.8 million, which was double its sales of eight years ago, at far better margins. “Job size is significantly more,” Trampe says, “and I can produce twice the sales with the same amount of labor.” The showroom-centric DreamMaker model has also considerably cut down on Trampe’s windshield time.

• Commitment to succeed. Franchise companies are happy to take your money, but they also want you to thrive. A healthy franchise base helps them sell new territories. So they look for “someone with drive, ambition, a commitment to excellence, and a heart for service,”Dwyer says. 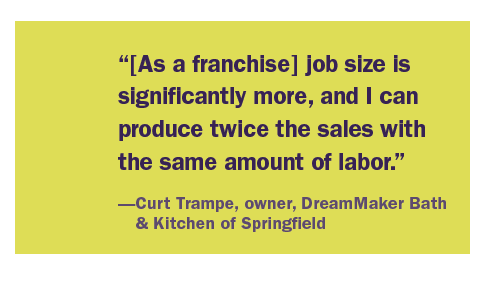 • Openness to suggestion. A good franchise will train you to fully understand production, payroll, sales, marketing, and customer service. But that training will only be valuable if you use it. “We want highly motivated people who will follow a proven system,” Fluke says.

• Specific skills. These include leadership, management, and professional selling skills. Professional selling is important because the typical home improvement franchise will work from a pricing model that calls for a higher gross margin to support net profit goals. Those higher margins come from knowing how to sell the efficiency and quality of the operation.

• Capital. A good franchise lists startup costs on its website (for a list of building and remodeling franchises, with startup costs, search for “franchises” at entrepreneur.com). If you already have a location, trucks, and staff, “the number falls fast,” Fluke says. You’ll be at the bottom of that range, paying for not much more than the one-time franchise fee. If you don’t, costs move up to include all that, plus the funds to carry you through training. Most franchise operations will want you selling and installing immediately after completing the training, but you’d still need to budget several month’s worth of operational expenses to carry your business to the point where it’s more than breaking even.

For franchisees, what makes it worth the investment is the ability to offer a well-branded name as a locally owned business—just like Burger King, just like Subway. But for DreamMaker Bath & Kitchen of Springfield’s Curt Trampe, the best part was the connection to other entrepreneurs in remodeling through regular biannual networking sessions. “That makes it easy to put your business side by side with theirs and do comparisons,” he says.

Almost 20 years ago, the company that’s today known as The Brothers That Just Do Gutters, in Poughkeepsie, N.Y., started as Ken Parsons’ part-time summer job. With a desk, a truck, and estimating sheets from Staples, that summer job grew into Water-flow Gutter Solutions, a gutter installer doing most of its work for general contractors and builders.

That all changed between 2008 and 2010, when Ken (left, in photo above) and his brother, Ryan, shifted the focus of their business, making homeowners their primary customers.

The Parsons brothers set out to “make every aspect of our business a system that could be followed,” Ryan says. Given job size—$1,500—lead procurement was a constant. Converting leads into jobs was critical. The right price was essential.

Ultimately, the biggest challenge was finding people who could install, interact comfortably with homeowners, and stay on schedule. So the Parsons brothers created a five-rung skills ladder, which kept them in crews. “We were creating a franchise model and we didn’t even know it,” Ryan says. When they did decide to franchise, the model was 1-800-Got-Junk, a hugely successful junk removal franchise, 11 years old, with more than 200 franchises in the U.S., Canada, and Australia.

A franchise with 10, 20, or 100 units would supply them with what Ryan Parsons calls “mailbox money.” (To watch a video about the process, go to YouTube, “How The Brothers That Just Do Gutters franchised their business.”)

But becoming a franchise was more difficult than the brothers had anticipated. They realized that they had to be paperless before going into franchising. Then, before launching, they decided to re-brand, with a new logo. They researched the gutter industry, concluding that potential franchise rivals were few, small, and pretty much inert.

Then, the Parsons brothers say, “we literally had to replace ourselves,” hiring others to run the gutter company, so that they, in turn, could manage the franchise. “Once you do this,” Ryan says, “you’re no longer in the gutter business, you’re in the franchise business.”

The last step was having an attorney draw up a Franchise Disclosure Document with the Federal Trade Commission, which contains essential information (including audited financial statements) and must be furnished to franchisees. In 2014, they became a franchise, and they now have four units.

Philadelphia-based freelance writer Jim Cory specializes in covering the remodeling and home improvement industry. Reach him with comments or story ideas at coryjim@earthlink.net.

Franchising in home renovation is set to grow. The key: creating systems that can be duplicated anywhere How should remodelers react to anxious consumers? Director of Content Erika Mosse shares her experience